How Does the Internet Work?

To understand what the internet is and how it works, we need to familiarize ourselves with a few crucial components such as:

Now we know that a group of computers that are connected and in communication with each other is called a network. When we connect different networks to each other, we are creating a “network of networks,” which is called the Internet.

The router will determine where to send the receiving packets and forward them to the next routers using the Internet’s addressing system or protocol called “IP” (or Internet Protocol).  When packets arrive in the right network and subsequently desired device on another network, the replied packets will go through the same path to be transmitted and giving us the internet as we know as use it every day. The video “Life of an IP Packet” is a well-simplified visual display of the basic internet concept, which is definitely worth watching.

The chart below from explainthatstuff.com shows the rapid growth of the internet since the 1980s in the world, and obviously, we should expect the continuance of this growth in quality and quantity in the future. Faster, easier, and cheaper internet access seems inevitable with new technologies and societies’ dependency on them, as we witness. 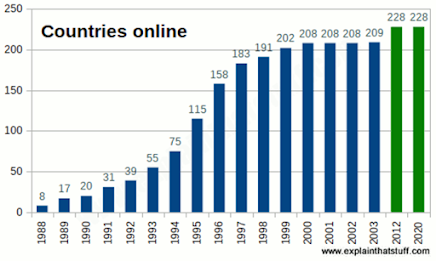 Constant progress in this field is projected, and companies continue to develop and employ new ideas and technologies. Perhaps some of these technologies, like Google’s “Loon Project,” won’t succeed due to business or technical reasons. Still, others like Elon Musk’s “SpaceX Starlink Internet” project would continue to examine different approaches to bringing the internet to every corner and remote area of our planet.

“How Does the Internet Works” is another simple and valuable source of learning about the general concept of the internet, deeper dive into coverage issues, and connecting different continents showing some fascinating scenes of the scope of wiring and connectors on the ground and underwater in the ocean.

According to the “SAM Seamless Network” research team report in April 2022, there have been more than 1 billion IoT attacks in 2021, of whic...

J. Chizari
Austin, Texas, United States
I am a seasoned corporate security professional with more than two decades of experience, enjoying returning to school after my first retirement and preparing for my second round of career adventures in cybersecurity.